Chai Masala is a traditional Indian recipe that varies by region. "Masala" means a blend of spices, and "chai" means tea. Chai Masala is tea with a blend of spices, usually consisting of a delicious combination of cinnamon, cardamom, and cloves. In our secret recipe, we've combined the sweetness of both vanilla and star anise with the spicy punch of ginger for a bold flavor. 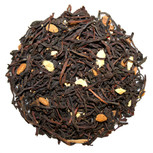